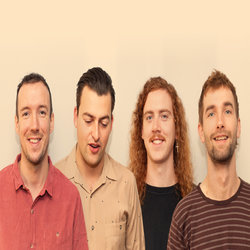 It's been an eventful five years since Jacob first started playing shows. The emo revivalists have undergone line-up changes and have played up and down the east coast with an impressive cast of national and international bands: Against Me!, Luca Brasi, Tigers Jaw, Joyce Manor, Hockey Dad, Trophy Eyes, Tired Lion and Ceres, to name but a few. The band also had the opportunity of performing at the Yours and Owls Festival in 2017.

Despite being split between the two steel cities of New South Wales – Wollongong and Newcastle – the current incarnation of Jacob is tighter than ever before.

Listeners may well already be across the band's 2017 single, How Long Until You're Next to Me? Scoring support from triple j, the track was described as “tight, cool and [with] swathes of great melodies” and holding “that nice mixture of sharp and sweet” by triple j staff.


It's about trying to navigate personal boundaries with your ex. In this case, when you're out at the same party. Ruairi Burns likes to make a lot of references when writing lyrics; songs he's listening to, books he's reading, shows he's I'm watching. You might notice little references to The X Files, Stephen King and my favourite Smokey Robinson song.