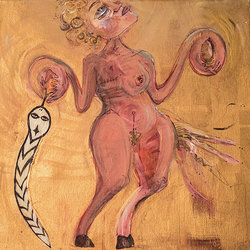 It’s been eight years since the Brisbane songwriter made firm her place in the industry as one of Australia’s most distinctive voices, and what an eight years it’s been.

Her third studio album, 'Lilith Shrugs', tracks Jackie’s experience through a tumultuous time in her life involving pregnancy, hospitalisation for mental health reasons, and a multitude of health problems including breast cancer.

With its flooring honesty of sentiment and its remarkable ability to tug at the heart strings, 'Lilith Shrugs' marks a triumphant return for Jackie. It’s incredibly humble, funny, sometimes sexy, sweet and pensive, and while Jackie has had her fair share of struggles over the last eight years, 'Lilith Shrugs' is the result of those tumultuous experiences.

“As an artist you’re supposed to have a little distance,” she says talking about the album's personal influences, "but I just couldn’t [with this album], you know? It is a bit of a musical memoir but I always try to keep things universal, where they touch, and myself overlaps with everybody else.”


Darling Et Cetera is a song inspired by a thing people do sometimes when they're looking for love, they look and tthey look until one day they realise that their lover is right under their nose. A friend they hadn't been able to see the true beauty of until a certain amount of time and learning had built up.