JOY. - Smoke Too Much 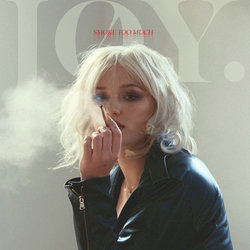 • JOY. is the musical vehicle of nineteen-year-old Olivia McCarthy, a singer-songwriter-producer and multi-instrumentalist who crafts ethereal and introspective electronic-pop songs anchored by sultry, hypnotic vocals, incisive songwriting and a keen focus on production.
• In her relatively short run, the ambitious multihyphenate has graduated from solo bedroom recordings, including her debut single 'Captured', to her acclaimed debut EP, Ode, which landed #1 on the Australian iTunes electronic charts in mid-2015. Additionally, JOY. has garnered strong support from influential tastemakers by the likes of triple j, Nylon magazine, which proclaimed, “JOY. could be Australia’s next great pop export”, and Beats1 creative centre Zane Lowe, who earmarked JOY. as ‘One to Watch’ at 2015’s Beats Sound Symposium in Sydney
• Following the release of "ODE" JOY. completed a sold-out Australian tour and also performed at festivals such as Vivid Sydney’s inaugural one-day music festival Curve Ball, and the annual electronic festival Listen Out. 2017 has seen JOY. supporting Kehlani on her sold-out Australian tour.
• Singles ‘About Us’ and ‘Like Home’ received support from Australian national broadcaster triple j and her debut EP “ODE” has been streamed over 5 million times


JOY. Returns with new single “Smoke Too Much.”