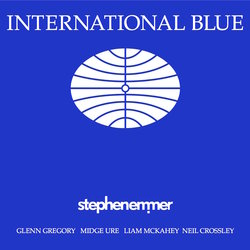 Stephen has again had the pleasure and honor of working with the legendary producer Tony Visconti, David Bowie’s long time collaborator, and the production talent behind releases by artists such as T-Rex, Iggy Pop, Gentle Giant, Moody Blues, The Dandy Warhols, Kaiser Chief...to name just a few. This title was recorded at Abbey Road Studios (London) and Avator Studios (NYC).

This recording features some of the best Baritones from the 80s through to the noughties such as Midge Ure (Ultravox), Liam McKahey (Cousteau and now; Liam McKahey & The Bodies), Glenn Gregory (Heaven 17), Neil Crossley (Furlined) and a bonus track featuring Julian Lennon.

This first single; Blown Away, features Liam McKahey, now a resident of Canberra, Australia. It's cinematic sound scope amplifies the beauty and adventurous nature of the song's melody and lyrics. The listeners can close their eyes and be embraced into the elegance and seductiveness of a 007 movie scene.


Instrumental version of the song. The elegance of this track's arrangement is self explanatory.