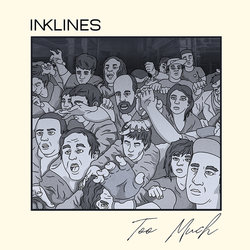 Inklines are a three-piece rock band from Sydney’s Northern Beaches, forming 2017. Drawing influence from a variety of bands including Silverchair, Radiohead and The Strokes. In the space of two years, audiences and fans alike have flocked in droves to see and hear the group’s unique take on 90’s alt-rock.

Since their incarnation, Inklines have released two EP’s, both with Lachlan West (The Vines) at the reigns – with a third EP on the way. In 2018 the band toured Australia coast to coast, performing in Sydney, Melbourne, Adelaide, Perth and Byron Bay – this run of shows, along with the release of their second single ‘Elusion’, also saw them supporting British India in May, and again during the NSW leg of their December tour.

October 2019 sees the release of Inklines first single from their latest sessions in the studio, ‘Too Much’. The song explores themes of loss and separation, conveyed through melancholic lyricism and impactful dynamic movements. Produced, mixed and mastered by Lachlan West, ‘Too Much’ is available October 4th.


The song explores themes of loss and separation, conveyed through melancholic lyricism and impactful dynamic movements. Introduced by an instantly familiar and memorable verse, ‘Too Much’ moves into the first of its explosive choruses, each one climbing in intensity. The song was produced, mixed and mastered by Lachlan West, and recorded at their local Housefox Studios in Sydney.