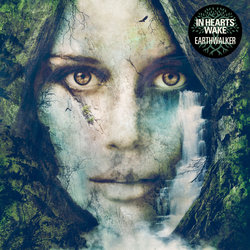 In Hearts Wake are a band with a commitment to the bigger picture, striving to convey a message of environmentalism and conservation through their music and beyond. They released their debut album Divination in 2012, quickly gaining a loyal following. The album and accompanying live performances earned a reputation for explosive precision and a positive message. Divination debuted at #27 on the ARIA Charts, and saw the band perform relentlessly around Australia, as well as a European tour supporting The Amity Affliction, multiple headline tours and a national slot on the Soundwave 2014 lineup. In late 2013, they released the single ‘Skydancer’ in a pay-what-you-wish online system where all proceeds were donated to charities supporting indigenous Australians, Americans and Africans.

Their latest album release Earthwalker was recorded in late 2013 at Michigan’s Random Awesome Studios with producer Josh Schroeder. The album displays a unique approach to songwriting for the heavy music genre, placing focus on giving each song its own story and motive. The dual vocal attack of Jake Taylor and Kyle Erich is displayed in full force, as both singers showcase their personal ability and teamwork throughout the 11 tracks.