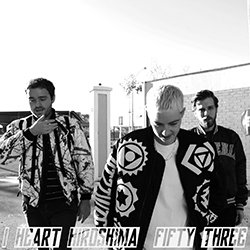 Always walking the edge of a chasm of togetherness… I Heart Hiroshima break like an intruder into the night with their reemergence playing after time apart inhabiting different worlds. Teasing the possibilities with some jams early 2016 when Sully returned from Berlin… subsequently lead to recording with Dubzy (Blank Realm); an impromptu performance for The Outpost 10th Anniversary. The chasm since filled with life and experiences.

Matt, Cameron and Sull set the pace for a new tune of episodes.

"To these ears, the result is a sound that's very "Brisbane": bright, trebly guitars with no effects pedals, strong pop melodies, unusual angles, lyrics and more going on beneath the surface than meets the eye, or ear. If you want to place it in a continuum of Brisbane music, it's the one that begins with The Go-Betweens debut, Send me a Lullaby.”


First new track in a bunch of years... and full of life and experience for it. Just check it out. Ha!