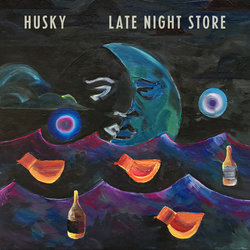 ‘Late Night Store’ is taken from the duo’s forthcoming third record, due for release next year. After relocating to Berlin in late 2015, Husky Gawenda and Gideon Preiss wrote ‘Late Night Store’ upon their recent return to Australia.

The song signifies a significant deviation of sound for Husky, which one might trace back to the nocturnal, mysterious, somewhat surreal nature of life in Berlin. The pair spent the better part of a year exploring the allure of the great city, taking in the charm of its abandoned buildings, getting to know its eclectic characters, and enveloping themselves in its vibrant creative scene: where night would quickly become day and then flit back again; where possibilities were infinite.

Following the release of ‘Late Night Store’, Husky will hit the road for their first national headline tour since 2014. With a new record up their sleeves, we can expect a revamped live show and a mesmerising set that includes unheard material performed for the first time.

Husky’s debut LP Forever So was released internationally via Liberation Music and Sub Pop to worldwide acclaim. The band’s stellar follow up record Rucker’s Hill featured the singles ‘I’m Not Coming Back’ and ‘Saint Joan’.


The duo’s natural ability shines on ‘Late Night Store’, though sonically they’ve added visceral new colours to their palette. A striking blend of guitars and keys are propelled forward by a steady groove, whilst Husky’s vocal floats along effortlessly; his poetic lyrics creating a twisted story that feels strangely relatable.

Other tracks by Husky: Ghost
%