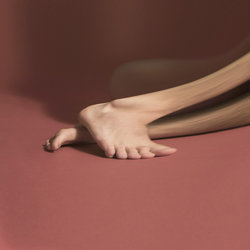 Whilst Elspeth sings of solace and sorrow, co-producers and band members Charlie and Andy replicate this melancholy and nostalgia through a soundscape which is both ambient and modulated - encapsulating that ‘low grade buzz’ feeling.

‘Low Grade Buzz’ is the albums closing track - as Andy explains, “This song fades into the sounds of the studio where we made most of this album at the end - sounds that to me are the ‘low grade buzz’ of the world we live in - a lawn mower, birds, the train passing, the wind chime… trying to place the listener gently back into the world at the end of the album”

After years of honing their craft and exploring ways of bringing together their wide range of influences, it is clear that Huntly have arrived with a carefully constructed and deeply personal debut album. Working between the margins of pop, R&B, techno and drum & bass, the album crafts narratives that shift suddenly in perspective and sound whilst still full of satisfying hooks and thumping codas.


‘Low Grade Buzz’ is an ethereal ballad that communicates life’s bittersweet ache, a blissful comedown after a euphoric night. Written in Tempelhof airfield in Berlin after a night out, accompanied by a dinky Yamaha keyboard, bought from an op shop and carried around Europe. It’s about fullness and emptiness and being a bit strung out after staying up all night.