Howl At The Moon - Sword Fighting 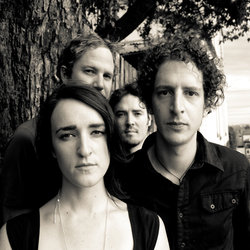 Founded in 2005 by principal songwriter Katie Scott (vocals/guitar) and Mark Renall (bass), the current line-up has remained since 2007 when Michael Brennan (drums) and Matthew Storey (guitars) were recruited and began working through an extensive back-catalogue of Scott’s unrecorded material.

The nine songs captured on their first (and currently nameless) album are in essence a band in the making. With tracking occurring over five days at Northcote’s Soundpark Studios, the band along with engineer and producer Myles Mumford (Lamplight, The Tiger & Me) set out to open up the songs and let the stories and perspectives contained within dictate the scope of the album. The result is as diverse as their live show, with the song-writing being showcased and augmented beautifully by the band’s arrangements.

From an outside perspective, the songs are very much an urban exploration of personal but universal themes – romantic disintegration, violence, self-sabotage. Yet in the face of such stormy weather the album remains truly hopeful.