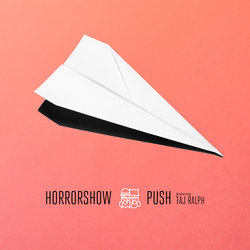 Horrorshow are a hip hop duo from Sydney, Australia, comprised of Solo (Vocals) and Adit (Producer).

Emerging in 2008 with an album largely created in high school, Horrorshow signed to Elefant Traks and released The Grey Space. It received immediate industry recognition with an ARIA nomination and a run of support slots on national tours. A year later they released Inside Story, solidifying their reputation for eloquent lyricism and soulful production.

Their third album, King Amongst Many, dropped in 2013 and landed at #2 in the ARIA charts; going on to be nominated for the J Award, ARIA Award, and a shortlisting in the Australian Music Prize. It was a testament to a group that pour their heart and soul into the crafting of an album, that they can achieve such success without hit singles.

Before beginning work on album #4, Horrorshow returned to rework their live show into an acoustic performance, selling out the ‘Listen Close Tour’ and unveiling the versatility and musicianship of their talents. A series of these performances were packaged up in a limited edition, hand-numbered album bundle, representative of Horrorshow’s dedication to their fans loyalty.


Horrorshow explore the bittersweet nature of possibility in their uplifting new single ‘Push’. ‘Push’ gets close to the heart of Horrorshow’s new album (due early 2017), where the transition between young and carefree and growing up and getting real is more pronounced.