Horrorshow - If You Know What I Mean 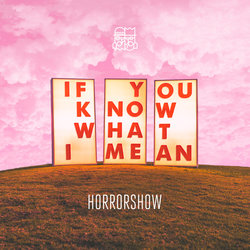 Horrorshow are a hip hop duo from Sydney, Australia, comprised of Solo (Vocals) and Adit (Producer). In eight years they’ve released three studio albums; sold-out a stack of tours; received nominations for numerous awards, and cultivated one of the most loyal and dedicated fanbases in Australia.

Emerging in 2008 with an album largely created in high school, Horrorshow signed to Elefant Traks and released The Grey Space. It received immediate industry recognition with an ARIA nomination and a run of support slots on national tours. A year later they released Inside Story, solidifying their reputation for eloquent lyricism and soulful production.

Their third album, King Amongst Many, dropped in 2013 and landed at #2 in the ARIA charts; going on to be nominated for the J Award, ARIA Award, and a shortlisting in the Australian Music Prize.

The collaborative experiences in the One Day project, combined with the explosion of One Day Sundays, has invigorated this inspired duo with a fresh approach for album #4, due early 2017. The first taste is the single ‘If You Know What I Mean’, followed by a national tour in October.


‘If You Know What I Mean’ finds Horrorshow in a great place; ambitious and confident, yet honest and direct; it’s an ode to giving yourself permission to feel good about yourself and your achievements.