Horrorshow - Did You Hear? 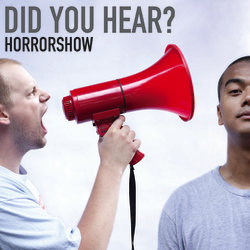 Emerging in 2008 and releasing their debut The Grey Space to great acclaim, including an ARIA nomination (Australian equivalent of a Grammy) and domestic tours across Australia. Their follow-up album Inside Story dropped in 2009 had a huge impact on the hip hop scene, resulting in sold out national tours and appearances at all the big festivals as well as ‘best of 2009’ lists.

In 2010 they made their first appearance internationally supporting Brother Ali in Germany and the Hilltop Hoods in England.

Seen as one of the brightest prospects in the new breed of hip hop artists, Horrorshow’s profile is on the rise both domestically and internationally with a third album set for release in 2012.


‘Did You Hear?’ sees MC Solo paying tribute to some of hip hop’s greats whilst making some irreverent and humorous observations on the local scene. The production sizzles and sparkles under the careful direction of Adit with a little help from a blazing horn section.