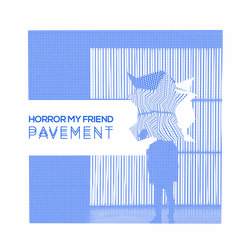 Honing a unique, yet evocative sound, reminiscent of 90’s pioneers Sonic Youth, My Bloody Valentine and taking cues from German legends Neu!, along with relative newcomers DIIV, Horror My Friend summon the spirit of alternative rock and shoegaze, whilst breaking new ground and embedding themselves firmly in the present. Within their relatively short career, Horror My Friend have caused a stir and garnered critical acclaim both nationally and internationally, through a strong commitment to chaotic, yet commanding live shows, touring, and the strength of their songwriting at such a young age, proudly displayed on ‘Pavement’, a long with 2016’s seminal debut album ‘Stay In, Do Nothing’.

With the announcement of new single ‘Pavement’ released through Poison City Records, coming at the end of the trio’s third tour for 2018, touring nationally with Emo legends Gyroscope, along with NZ post-punks Die! Die! Die!, both in New Zealand and Australia, Horror My Friend have taken a step up within Australia and into the international area.


‘Pavement’ sees Horror My Friend take a step out of their lethargic, suburban home; making a fierce statement on gender inequality and the state of the wider, Australian music industry, filtering it through a dynamic wave of enveloping fuzz and reverb.