Horror My Friend - No Energy 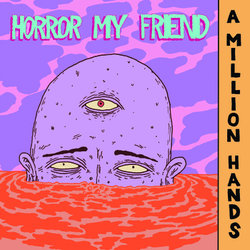 While coming from ordinary beginnings, Adelaide’s Horror My Friend, Josh Battersby, Tom Gordon and Sam Kolesnik, and their unique style of urgent Indie Rock breaks new ground, while recalling the sounds of the Grunge and Shoegaze movements of the nineties.

Off the back of 2012’s “Lifeblood” ,2013’s “Birds” and “Urgency”, along with 2014’s critically acclaimed “A Million Hands” EP, featuring the singles “Kaleidoscope” and “Nothing”, Horror My Friend were thrown into the spotlight of the wider national community, quickly picked up by Perth’s Gun Fever (Emperors, Super Best Friends, Sincerely Grizzly, etc) as both a booking agent and record label. Off the back of these releases, Horror My Friend has supported the likes of The Cribs (UK), Violent Soho, DZ Deathrays, and more, in addition to touring with British India. These hard hitting tunes gained the trio the spot of Triple J Unearthed Feature Artist (April 2013) and valuable airplay on Triple J and Unearthed Radio, along with community radio stations nationwide. “Birds” was even the 22nd most played track on Unearthed Radio for 2013. These releases led to features and critical acclaim among Triple J presenters and leading music websites and airplay on the ABC TV music show, Rage.


“No Energy” is Horror My Friend’s third single from “A Million Hands”, a slow-burning condemnation to feelings of futility and failure. Reeling in the listener in seconds, as the track builds and explodes in a wave of fuzz, demanding to be played again and again.