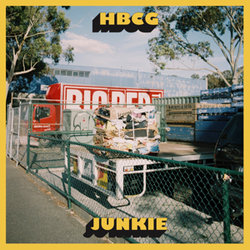 Hobson's Bay Coast Guard are just one of those bands, already worthy of harbouring some jealousy for. They've been called "surf-psyche' and been lumped with comparisons more times than they'd care to remember - yet here there are, arriving seemingly out of nowhere fully-formed with a cannon of perfectly put-together songs. Sure, they nod to their influences respectfully, but they do it so damn well that it's too genuine to exist as anything other than their own.

Two years have been spent percolating a debut album, forming the team and signing a record deal. Following 2018's Dolphin Racer', 'Surf 1' and 'Wannabe', 'Junkie' is the fourth piece of the puzzle and took no less than 11 versions to get to the one the band was happy with.

Their melodies have been compared to a "...skittish Beach Boys", while overall their sonic flavours have evoked Tame Impala and Parquet Courts and everyone in-between, but come album time, expect those comparisons necessary for a new band to dissipate while HBCG swiftly take on a life of their own.


A classic take on the slacker-surf-psyche vibes sitting somewhere between Tame Impala, Parquet Courts and King Gizzard, but with skittish Beach Boys harmonies and with a sound that is entirely their own.