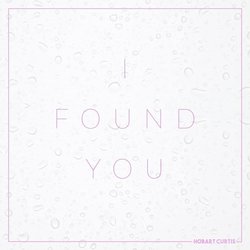 Hobart Curtis is a Solo-Artist and Producer from Brisbane, Australia. The Australian artist has been active since 2015, and has released multiple tracks. Having started his musical career behind the drum kit, playing for multiple bands including Post-Hardcore and Punk outfits, Curtis turned to making his own brand of introspective pop-music after a long bout of lacking direction.

Continuing on with pivotal singles Hits, New Squeeze (I Won’t Leave) and Model, the young artist has continually put forward consistent releases in the midst of changing personal circumstances. All the while, touching on various genres and pop-sub genres, while maintaining his honest lyrical content, catchy vocal delivery and building and atmospheric guitar work.

Hobart Curtis intends to cement himself as one of Australia’s up and coming song writers, and intriguing musical acts.


"I Found You" is a positive and uplifting track, cemented around the unique and encapsulating experience of finding someone who you immediately connect with. Featuring building enigmatic verses and a electric release of a chorus, "I Found You" showcases the young songwriters ability to engulf a track with emotional energy from start to finish.