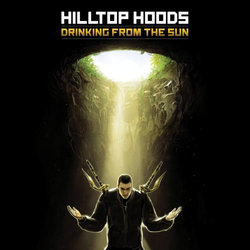 In the early 1990s, emcees Suffa and Pressure met at a high school in the picturesque hills of Adelaide, South Australia. Later introduced by a mutual friend to DJ Debris, the trio found common ground with their love of Ultramagnetic MCs and Public Enemy, along with local pioneers Def Wish Cast and AKA Brothers. The crew’s first EP, Back Once Again dropped in 1997, the broad Australian accents, nimble flows and stunning beats declared the arrival of a significant new force in Australian Hip-Hop. The Hoods have grown in both stature and skill through five full length albums – A Matter of Time (1999), Left Foot, Right Foot (2001) The Calling (2003), The Hard Road (2006) and The Hard Road: Restrung (2007). While their path has drawn on a broad range of influences, they have never lost touch with the unique flavour they created in the Adelaide Hills as young Hip-Hop fans. With an ethos that is innovative and fearless, Hilltop Hoods’ inspirational sound has been embraced far beyond Hip-Hop’s loyal underground.


‘Speaking In Tongues’ is the follow up to the double platinum, top 10 ARIA and #11 Airplay charting single ‘I Love It’. It’s the second single to be lifted from the #1 album Drinking From The Sun.
Chali 2na from Jurassic 5, brings enormous credentials to the track.

Other tracks by Hilltop Hoods: I Love It feat. Sia  -  Shredding The Balloon