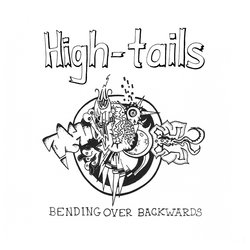 Recorded at Sony Studios with producer Adrian Breakspear, it's a slinky rock stomper that channels Spoon, Orange Juice and Arctic Monkeys and follows on from their debut 2013 song "Maps".

In its wake High-tails played shows with The Cairos, Yukon Blonde, Flyying Colours and more, as well as completing their own East Coast co-headline tour with Brisbane's Fox & Fowl.

They even managed to squeeze in a pollie-star jam with Sydney Lord Mayor Clover Moore, who joined them on-stage at the launch of the City of Sydney's Live Music & Performance Action Plan in November.

High-tails are currently putting the finishing touches to their debut EP, which will include "Maps" and "Bending Over Backwards" and is due out later this year. Tour dates for 2014 announced soon.


"Bending Over Backwards" is the new 2014 song from happenin' Sydney guitar-popsters High-tails.
Recorded at Sony Studios with producer Adrian Breakspear, it's a slinky rock stomper that channels Spoon, Orange Juice and Arctic Monkeys.