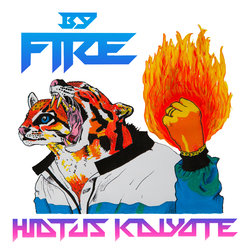 Written, recorded, produced and initially released independently by the band (later re-released by Flying Buddha/Sony Music Masterworks), Hiatus Kaiyote's debut album ‘Tawk Tomahawk’ and the single ‘Nakamarra’ grabbed the attention of some of the most innovative artists on the planet.

Prince, Pharrell Williams, Erykah Badu, Flying Lotus and Questlove sang Hiatus Kaiyote’s praises on social media and in interviews, helping to spread the word about this band from the other side of the planet.

Over the past 12 months Hiatus Kaiyote has toured the world relentlessly - selling out shows across North America, Europe and Africa. They’ve performed live on The Tonight Show with Jay Leno, The Queen Latifah Show, The Arsenio Hall Show, KCRW’s “Morning Becomes Eclectic”, and many more.

At the beginning of this year, they were nominated for a Grammy Award for ‘Best R&B Performance’ for their single ‘Nakamarra,’ the first Australian act ever to be nominated in that category!

Hiatus Kaiyote has carved their own unique space in the world of R&B/Soul. Their sound references the widest range of influences --electric, acoustic, futuristic, psychedelic, progressive, soothing and urgent-- slipping in and out genre and defying definition.


‘By Fire’ is Hiatus Kaiyote’s first release since their internationally acclaimed debut album, ‘Tawk Tomahawk’. A taste of their sophomore album 'Choose Your Weapon', due for release in March 2015.