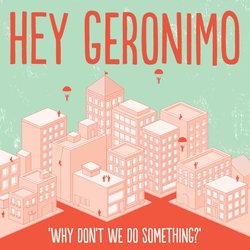 Brisbane locals Hey Geronimo are celebrating summer with the release of a brand new single “Dreamboat Jack”. Featuring a 007-esque chase to rival anything in Skyfall, the track has consistently been lauded by critics as a high point of the band’s debut self-titled EP.

The single follows triple j favourites “Why Don’t We Do Something” (which has topped over 850,000 YouTube views) and “Carbon Affair” which have seen the band gracing major international media, blogs and even TV shows as well as national tours and festivals around Australia including BIGSOUND, Fat as Butter and upcoming appearances at Homebake and Peats Ridge.

Having also just been announced as the national support for next year’s Presidents of the USA shows, the band are helping punters through summer, with a run of shows including a much-anticipated Christmas party in Brisbane and some headline dates and festivals in Sydney through December.

“This is what happy sounds like; pure, unpretentious and highly enjoyable guitar-pop." 4 Stars, The Brag


The new single from Hey Geronimo. Featuring a 007-esque chase to rival anything in Skyfall, the track has consistently been lauded by critics as a high point of the band’s debut self-titled EP.