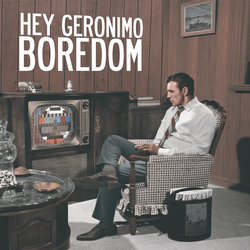 Arriving onto the Australian music scene in 2012, Hey Geronimo has enjoyed substantial local and international attention, with over a million views on YouTube, an inclusion in triple j's Next Crop list, an entry in the US CMJ Radio Top 100 Charts, and appearances at major local and international festivals. Now, Hey Geronimo’s debut album, Crashing Into The Sun (released Friday 20th May via Chugg Music), is undoubtedly set to build upon their existing achievements.

Hey Geronimo are also pleased to announce a fifth member into their fold — Sydney’s Pluto Jonze — after a coincidental encounter in a casino bar. Now that one of Australia's most underrated indie writers has officially joined the band, Hey Geronimo boasts four songwriters and — more immediately — four singers.

This fundamental diversity, along with a wide range of influences from The Beach Boys to Weezer, has seen the band manage to steer clear of an obvious “indie sound” and craft their own path on their debut album.

Crashing Into the Sun is the product of three years and four different songwriters to create a dizzying and rambunctious 36-minute collection of rock and guitar pop.


"Boredom", the lead single from Crashing Into The Sun, is an explosive rock track that addresses the horrible frustration of being chronically bored. Speaking about the track, guitarist Ross Pearson says "there’s nothing better than a song that rocks out, and this is where we wanted Boredom to land".