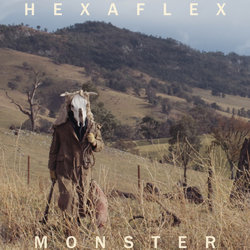 Introducing the debut single "Monster" for Hexaflex, a solo indie rock production hailing from deep within the countryside of the Blue Mountains, Australia.

In early 2014 Josef Heks returned to the farmhouse where he grew up in Megalong Valley and spent 3 months alone writing, performing, recording and mixing a 4 track EP. All instrumentation (excluding drums) performed by Josef Heks.

Monster is the debut single, a brooding rock song with swagger which draws inspiration from the serene yet unsettling atmosphere of the isolated Australian countryside.

The eerily atmospheric slowmotion music video to Monster was directed and filmed by Josef Heks, also a film-maker, in the stunning surrounds of Megalong Valley. It has received thousands of views online and counting.

The EP is currently completed, mastered to tape by the legendary Don Bartley, and is awaiting release.


Monster is about darkness hidden beneath the surface. It is a brooding rock song with swagger which draws inspiration from the contrasting serene yet unsettling atmosphere of the isolated Australian countryside.

Other tracks by Hexaflex: Swallow