Hetty Kate - On The Street Where You Live - Internet Download 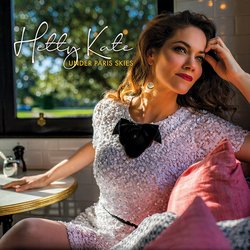 "Charismatic and technically gifted" (All About Jazz, USA) jazz vocalist Hetty Kate has "a stage presence only matched by the clarity of her voice.." (James Morrison, AU). Raised in both England and Australia, and now dividing her time between Melbourne and Paris, Under Paris Skies is her ninth album.

Originally trained in classical voice, Hetty’s approach honours the composer by keeping true to the melody and lyric, and uses improvisation in a way which never detracts from the story of the song. Finding her home within the poetry of the Great American Songbook, Hetty is a skilful song-stylist and has performed across Australia and internationally for the last decade.

Career highlights include touring with James Morrison's bands, including the role of featured vocalist with his award-winning international symphonic concert "The A to Z of Jazz”, singing for sold out concerts at the Sydney Opera House and the Prague Proms in 2016. Hetty has performed at jazz festivals including the Melbourne International Jazz Festival, Stonnington Jazz Festival and Wangaratta Jazz & Blues Festival, as well as many other festivals across Australia, Asia, North America, Europe and New Zealand.


Hetty Kate's album 'Under Paris Skies' is a collection of her favourite standards, carefully crafted into an intimate diary of her first year living in Paris. Lerner and Loewe's classic composition truly captures the magic of the grand boulevards in La Ville-Lumière, and features guitarist James Sherlock and bassist Ben Hanlon.

Other tracks by Hetty Kate: Get Out Of Town  -  Azure-Te (Paris Blues)
%