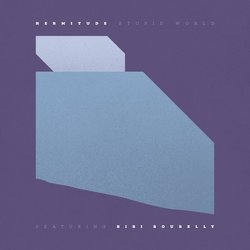 Hermitude are El Gusto and Luke Dubs, an award-winning duo from the Blue Mountains who are now based in Sydney.

Hermitude are an evolving success story, from humble beginnings born in music and friendship, to creative and commercial peaks that grow with each release. Their previous album, Dark Night Sweet Light, was #1 on the ARIA charts and reached global audiences with hits like 'The Buzz' and 'Ukiyo'.

The duo are signed to Sydney label Elefant Traks and have been a longstanding force in the Australian music scene. Signing with Nettwerk Records in 2015 saw Hermitude introduced to international crowds, touring the US and reaping in successes at lucrative festivals including SXSW, Governor’s Ball and Lollapalooza.

Now, three years on, El Gusto and Dubs have emerged from the lab with something new. Something revitalised and fierce.

‘Stupid World’ is their powerful new single, a response to the craziness seeping into our everyday. The track sees songwriter and vocalist Bibi Bourelly - whose writing credits include Rihanna, Usher and Mariah Carey - bring her incredible sound to Hermitude's music. It's the start of a new and exciting chapter in their story, as Hermitude continue to challenge and innovate.


Stupid World is the first taste of a brand new project from Hermitude, after the success of their #1 album ‘Dark Night Sweet Light’.

Bourelly's lyrics are about taking control of a bad situation, illuminating the way ahead.

Bibi Bourelly co-wrote Rihanna’s ‘Bitch Better Have My Money’, Mariah Carey's 'GTFO' and has featured on tracks by Lil Wayne and Usher.