Hermitude - Get In My Life 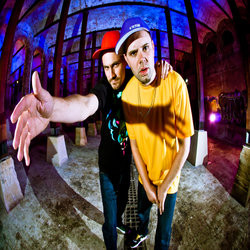 Hermitude released their first EP 'Imaginary Friends' on Elefant Traks in 2002 creating quite a buzz.

Their debut album, Alleys to Valleys (2003) was critically adored. Tim Ritchie called it “One of the best hip hop/breaks releases I’ve ever heard”.

Their second album Tales of the Drift was released in 2005 with the first single Fallen Giants quickly gaining high rotation play on triple j.

In 2006 they performed in Malaysia, Norway, Spain, Japan and then landed the main support for Aceyalone and Abstract Rude’s West Coast USA tour. Soon after they released the Rare Sightings EP, culminating in a sold-out national tour.

Their third album, Threads came out in Sept 2008. It's a dark and melodic opus featuring amongst others, Jamaican reggae star Luciano.

In 2010 Dubs joined the Tom Tom Crew for a tour of Europe whilst Elgusto produced The Tongue's Alternative Energy album.

Hermitude will release their fourth (untitled) LP in 2011.


Hermitude return with their unique brand of world-class beats.