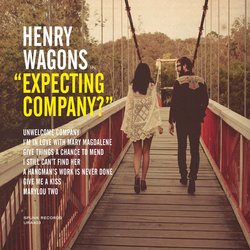 Another voice adds an extra element to Wagons’ potent sound, with bubbling sexual tension and drama. “I do love a good duet,” Henry smiles. “I particularly love the slightly fractured ones that reveal or give an insight into the complexity of human relationships.”

There’s melodrama, mirth and menace; gallows humour (the delightfully dark ‘A Hangman’s Work Is Never Done’), misguided lust (‘I’m In Love With Mary Magdalene’), longing (‘I Still Can’t Find Her’) and loss (‘Give Me A Kiss’).

Henry recorded most of the release in his personal studio, self-producing and playing most of the instruments. He visited London to record Alison Mosshart’s vocal at her house (the location that inspired the opening cut, ‘Unwelcome Company’); he met Jenn Grant while touring Canada, and he travelled to Brisbane to work with Robert Forster.