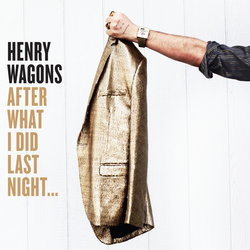 What do you get when you mix Nick Cave’s growling menace with Elvis Presley’s gold lamé swagger and then add Lee Hazlewood’s twisted melodramas and a bit of Johnny Cash’s hangover blues? A man named Henry Wagons – a musician Justin Townes Earle has described as being “like Dr Seuss meets Conway Twitty.” There are few in Australia who can lay claim to outlaw country like Henry Wagons. Possessed of a voice as deep and dark as a moonless desert night, along with the knack for penning a lyric that sees the mundane everyday become somewhat mysterious and eerily ancient.

After a decade and a half fronting the stage-shattering band which carries his surname, plus the release of a solo mini-album, a radio show and numerous television appearances, Mr Wagons has struck out on his own.

Wagons’ wickedly dark wit draws the listeners’ attention, and he certainly packs After What I Did Last Night… with entertaining tales of drunken bar fights, morning-after laments and strange encounters in Poland.

After What I Did Last Night… is Henry’s dream solo album. A uniquely personal collection of songs that essentially charts his life and heralds a new chapter for Australia’s ultimate outlaw countryman.


Santa Fe is a rollicking, arse-kicking alternative country / Americana tinged track that takes the listener on a journey as only Henry Wagons can.
A great vibe, sure to set radio playlists alight to close out summer!