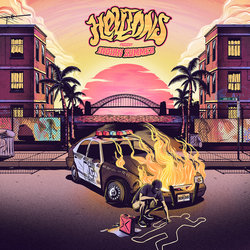 Forming in early 2013, Sydney’s own Hellions wasted little time in establishing themselves as a national presence. Releasing their first single ‘Infamita,’ in June of that year, the group quickly racked up supports and tours with Deez Nuts, Attila and Every Time I Die before releasing their UNFD debut, Die Young, in September.
Opting to maximise the time they’d been afforded, Hellions once again travelled to Thailand, to record Die Young’s follow-up with long-time producer, collaborator and most importantly, their trusted friend, Shane “Buddha” Edwards, at Karma Sound Studios.
The result of those sessions is Indian Summer, Hellions’ challenging, adventurous but ultimately rewarding second album. Dissatisfied with much of today’s heavy music, Dre, Anthony (Caruso, drums) and Matthew (Gravolin, guitar) opted to draw on the sounds that inspired them in the first place, at times channeling the groove and power of Rage Against The Machine, alongside the grandiose theatrical nature of My Chemical Romance. Remarkably, Indian Summer maintains its composure in what can only be described as controlled chaos.


Nottingham is the ballad on Indian Summer that is about "comparative thinking and jealousy within a relationship; The unearthing of the erstwhile in cardiac landfill after incessant inquiry, begetting a mutual resentment," says guitarist Matt Gravolin.