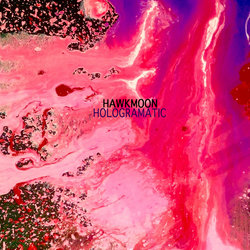 Hawkmoon are the collective musical identity of Pat Hehir, Liam Hehir and Reuben Aptroot. Their soon to be released debut album aims to fill the void in a current musical landscape where eclectic, accessible but challenging songwriting has gone underground.

After numerous live gigs, festival appearances and EP releases with earlier incarnations of Hawkmoon and Reuben's Ultrafeedy, the three would be brought together in 2013 under the Hawkmoon banner to create music that was thoughtful, challenging, bold and fresh.

After the initial shows together, the decision was made to pursue the three’s ultimate goal - record a full length album. Not a rock album, not a pop or experimental album, but an album that covered the broad array of music that inspired them to make music - a Hawkmoon album. A daring task in the age of music streaming, where the relevancy of the album as an artistic statement has slowly been eroded.

Over 2 years in Reuben’s bedroom recording studio, DIY production techniques allowed the band to fully explore their own sonic palettes, songwriting methods and ultimately capture a group of songs they are extremely proud of. From relentless, energetic rock to atmospheric ballads, hook-driven pop to experimental soundscapes.