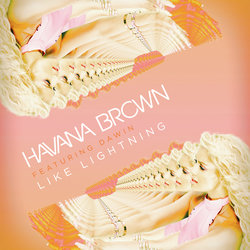 Having achieved enormous global success through club shows and recorded music, Havana has amassed 1M loyal Facebook fans, over 57M streams of her music and sold over 3.2M singles worldwide.

Her single ‘We Run the Night’ reached Triple Platinum in Australia and debuted on the ARIA Singles Chart at #7. The single went on to sell over 1 million units in the US, and hit Top 30 on iTunes in over 30 countries across the globe.

Her debut album ‘Flashing Lights’ debuted on the ARIA Albums Chart at #6 and contained ‘We Run The Night’ as well as Double Platinum single ‘Warrior’, and Platinum Single ‘Big Banana’.

This year Havana starred on Channel 10's ‘I'm a Celebrity Get Me Out Of Here’ - averaging 1.2 million viewers a night.

Havana is now back in Australia to release and promote her hot new single ‘Like Lightning Feat. Dawin’

Fresh from wrapping up club shows in the US, Havana’s visit includes a headline performance at Nickelodeon SlimeFest where she will perform ‘Like Lightning’ for the first time.


Recorded in LA, ‘Like Lightning ’ was written by Kesha, Stuart Crichton, Dawin and Brit-Award-winner James Newman (brother of John Newman and song-writing credits with Rudimentals). Once written, Kesha decided to send it to Havana to record, resulting in a track now ready to light up clubs/airwaves across the country.