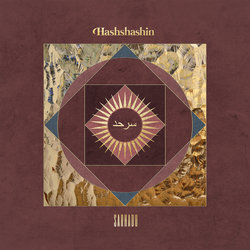 As a first single, Crossing The Panj expands on this flawlessly. The band frame themselves in a new light as hypnotic, ominous riffwork, towering crescendos and layers of reverb intersect with subtle polyrhythms. The end result is dramatic journey-telling at it’s finest – a song that starts in footsteps and ends in collapse.

“This was actually one of the final songs we wrote for the album,” says Dale. “After searching and experimenting with new instruments and approaches, we closed the circle by returning to our roots with this piece. It feels like a bridge between our debut album nihsahshsaH and Badakhshan, and so we named it to symbolise our crossing into new territory.”

“To expand on this and the record in general - it’s difficult as a Western atheist to talk about mysticism. When I hear classical Hindustani music, I get glimpses of religious and metaphysical ideas that are fascinating, yet represent a tradition and style that are inaccessible to me.”


“(Hashshashin’s) music is powerful and muscular and ranges from full on psychedelic rock-outs to fully hypnotising drone. Often ragged and cathartic, this is, in its own way, soul music, music that taps into a primal, tribal, part of our consciousness that we, in our too comfortable Western civilisation, rarely draw from.” - Echoes And Dust