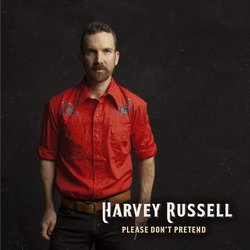 Harvey Russell first began treading the boards of Sydney’s pubs and bars as frontman for the rock and alt-country Harvey Swagger Band in the late 2000’s before exploring more acoustic-based country-folk in the duo Peasant Moon (with Josie Rothwell). In recent years, Harvey’s music has received attention both in Australia and overseas. He has achieved international recognition with performances at Canadian Music Week (2016) and touring throughout the US in 2017. Peasant Moon’s debut EP was a finalist in the Australian Roots Music Awards (EP of the Year, 2016) and the song ‘Over Again’ was a finalist at the 2018 Tamworth Country Music Festival’s Songwriters Awards.

'Liquid Damage' is Russell's debut solo album, a collection of classic country songs for the modern world, recalling everyone from George Jones to Daniel Romano, The Rolling Stones to Ryan Adams. It takes in all forms of country music – from classic to outlaw, alt to Americana. The album is a shining example of a singer and songwriter high on confidence and channeling his muse with clarity and a full heart.


Please Don't Pretend is a hot-stepping slice of hard country, built for dusty dance floors and car stereos as Harvey Russell sings of moving on and cutting all ties with a relationship that’s (in the character’s mind) firmly in the rear view mirror.