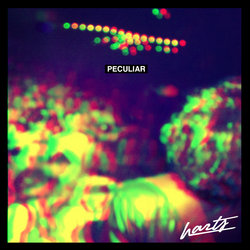 Harts’ latest tour added to the already impressive number of shows he has clocked up in 2015. He featured at Splendour In The Grass, Groovin' The Moo, The Hills Are Alive, and shared the stage with Peking Duk for Stereosonics and The Rubens on the Urban Spread Summer Series. He was the buzz band at Bigsound in September 2015 and various showcases in the U.S the following month, including Culture Collide in L.A and CMJ in New York. His return to Australia at the end of 2015 saw him perform at the 2015 AIR Independent Music Awards, The Age 2015 Music Victoria Awards, Falls Festival 2015, and NYE on the Hill

In anticipation of his forthcoming album due for release in August 2016, Harts releases his second single “Peculiar” on March 4th 2016. Already gearing up for a big year, announcements for Groovin' The Moo, Bluesfest 2016, and SXSW 2016, “Peculiar” follow up a sold out Single Launch Tour for “All Rise (Play It Cool)”.


The new single showcases Harts’ soaring melodies to match his guitar artistry. He blends RnB influences with his signature riffs and sparkling synths, settling into a laid back groove and an unforgettable chorus.