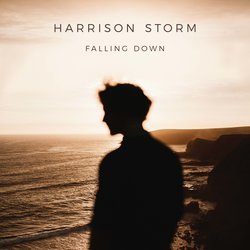 Harrison Storm is 24-year-old singer/songwriter based on the Mornington Peninsula, Victoria.

With a handful of finely tuned folk based demos, Harrison turned to friend and producer Hayden Calnin, who helped bring to life his ideas, which formed his debut EP titled ‘Sense of Home’, independently released in April of 2015. Since then, Harrisons debut has received 4 million online streams, radio play on Triple J and KCRW (US), appeared in 2016 TV series ‘Degrassi: Next Class’ , as well as reaching the semi finals in the 2015 International Song Writing Competition.

From intimate and captivating solo shows, to full band performances, Harrison has gained a loyal live following in Melbourne and has supported acts such as Husky, Kyle Lionhart, Hein Cooper and Woodlock. 2016 is set to be a busy year for Harrison, with the release of a new single, interstate touring and festival performances.


Falling Down is a song about those times in a relationship where there seems to be a shadow looming overhead and you’re desperately trying to see through it and hang on.