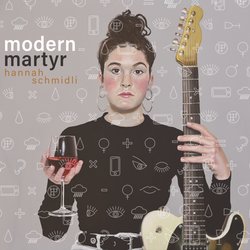 Hannah Schmidli is a young, independent, singer-songwriter based in the Yarra Ranges just outside Melbourne, Australia. She has emerged out of the local acoustic and folk music scenes and has evolved throughout her teenage years with the inspiration of different genres and artists.

Since writing and recording her first LP (Shadow) in 2016 and subsequent LP (Someone Else) in 2018, Hannah has continued carving her niche in what can best be described as acoustic indie/folk with underlying hints of jazz and blues. This has culminated in the released her critically acclaimed EP, "Modern Martyr" in November 2019.

She is a dynamic songwriter who displays a writing maturity beyond her age. Her performances are engaging and thoroughly entertaining. She has the rare ability to be able to connect with audience members young or old and take them with her as she weaves images with her lyrics, stories and music.

Hannah already has an impressive list of festival and venue performances, radio interviews and appearances, songwriting and performance awards as well as having written, recorded, co-produced and released two albums to date.


The title track of Hannah's Nov 2019 release EP, Modern Martyr is all about a 21st-century complainer with a dark satisfaction in suffering and self-absorption in trivial, frivolous and utterly shallow 21st Century problems.

Other tracks by Hannah Schmidli: Stare Away  -  Oliver (and Olivia)
%