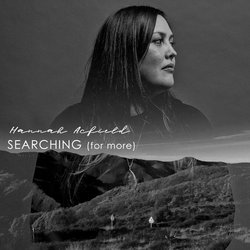 “An expressive voice that engages you instantly" – Gotye

When you hear a voice that transports you to a different place, makes you feel something intangible, and stays with you long after the song has ended, you know you've found something truly special.

Growing up in a musical family, Hannah has been playing music most of her life. After studying contemporary music at the Queensland Conservatorium, Hannah moved to Melbourne. A soloist for the Melbourne Mass Gospel Choir, Hannah's flexibility and experience as a vocalist has seen her travel the country making music both as a solo artist and as one half of the folk duo The Acfields with her brother Dan.

She's released two solo EP’s, one EP and two albums with ‘The Acfield’s'. Highlights include: Highly Commended in the QMusic Awards, MusicOz Finalist and #65 in the 4ZZZ Hottest 100. She has opened for artists such as Joan Armatrading, Josh Pyke and Vika and Linda Bull.

‘Searching (for more)’ which is a move in a new musical direction, is the first single from Hannah Acfield in nine years, who is currently working on her debut album.

Inspired by a 700km walk through Spain, Acfield describes her secular song as ‘Garage Gospel without the church’.

This song touches on the yearning for simplicity and connection in a seemingly disconnected society.

Acfield will warm your heart and open your soul.