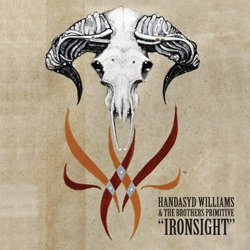 Handasyd and co. list a rather boutique list of influences that include Whiskeytown, The Jayhawks, or the more current Lucero and Drag the River.

On releasing his debut album "Artisan Hill" in 2006, Handasyd Williams effortlessly created a niche in Australia's modern folk scene. After more than a decade of playing in rock bands, his amazingly congruent songwriting and unique voice created interest everywhere the album was played and his intimate live shows won over more fans still.

After roughly a year of gigs since their inception, Handasyd Williams' Alt-Country rock band, "The Brother's Primitive" have now released "Ironsight"

The Brother's Primitive are essentially a bunch of ex-rockers now consumed with playing Alt-Country in it's purest sense. They adhere to the Americana "Alt-Country" ethos quite strongly, playing rough cut, contemporary songs with a distinct Country. But although the instruments are all of "southern" persuasion (archtops, slide, ludwigs, mandolin, fiddle) they don't always sound country, a folky ballad here, some dirge like punkrock there, the only constant being Handasyd's unique voice, warbling some very unique and congruent melodies with a definite darker hue than your standard country hokey or blues drone.


A country-rock ballad about admiring the love of your life, from a distance, over a pool table. The perfect blend of acoustic and vintage rock guitar sounds, played through old tweed amplifiers and accompanied by a warm, sentimental melody. Transcends both socio-economic class and both old and new genres.