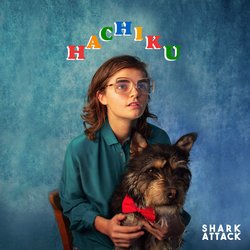 Bandleader Anika Ostendorf was born in Livonia, Michigan, found her early-childhood years bouncing between America, England, and Germany, before her family settled in sleepy Dansweiler, outside Cologne in Western Germany. She formed her first band, Tutti Frutti, at seven, writing the songs herself.

She left for London to study biology, and then, fatefully, spent a year on exchange in Melbourne, with an eye on the city’s famed music scene. Whilst studying, she interned at Milk! Records, from which she took DIY ideals, a strong sense of musical community, and a record deal. She assembled a crack local combo (Georgia Smith, Jessie L. Warren, Simon Reynolds), released the first self-produced, recorded and mixed Hachiku EP, and played countless shows around town; becoming a staple of the music scene she once looked at, longingly, from afar.

Hachiku are performing at Icelandic Airwaves and a German run of shows with Kevin Morby this month before heading to the US to support Courtney Barnett on her sold-out solo tour in January & February and at SXSW in March. Locally, you can catch Hachiku at the sold-out Milk! Xmas Party in December and at their January residency at The Retreat in Melbourne.


‘Shark Attack’ is a study of loss and grieving, following a grim diagnosis of Ostendorf’s family dog. “If you're like my friend Tushara you might think this song is about oral sex. I think it very clearly references my little dog childhood best friend Lexus being diagnosed with throat cancer and the emotional devastation his looming death left me in...”