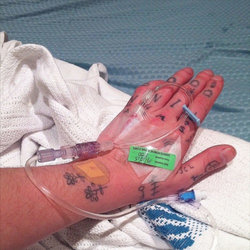 Grant Gronewold is a 29-year-old musician and visual artist from Melbourne. Grant’s story is as follows: He grew up sick and poor in America, a terrible place to grow up sick and poor. As is typical of the US, Grant was constantly denied medical care. In 1998, Grant, his little brother and his mother fled to Australia with what little money they had. Eight years later, he dropped out of high school to make music and art, and he’s been doing it ever since.

The album is, on occasion, shatteringly bleak – but more than anything, Chrome Halo is about love. Grant doesn’t have much time left, and this record finds him trying to temper the anger in his heart with love. By showing it to his friends and family, and by accepting it from those he’s close to.


When you go in and out of hospital as much as me, you're not the same... Being alone changes you... There's a chrome lighting fixture on most of the lights in hospital, a chrome halo that I take with me when I leave - HTML Flowers