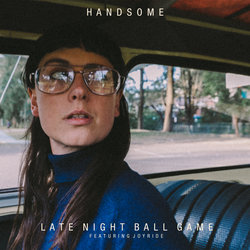 Remote Control Records are thrilled to announce the signing of HANDSOME to Dot Dash Recordings. The announcement comes with the release of new single 'Late Night Ball Game feat. Joyride,' premiered on Home & Hosed, triple j and lifted from an EP, No Hat No Play, coming early 2018.

Sydney-based HANDSOME is a new artist, Crafting music mostly in home studios around NSW, HANDSOME has a knack for the DIY. Working with artists and writers with strong pop sensibilities. Crafting a mix of tomboy pop and brooding electronica. The bold new sounds herald a celebration of self-expression and carefree creativity, whilst still being accompanied by obsessive perfection.

The name HANDSOME is a nod to her queer identity and is inspired by her strong friendships, falling in love, kissing girls and rolling your eyes at people who have opinions on who you should be. HANDSOME is a statement of defiance.

HANDSOME has seen previous success under the moniker Caitlin Park, garnering critical acclaim, winning the SOYA award in 2013, landing a nomination for the Australian Music Prize in 2014, and playing shows with the likes of First Aid Kit, SOAK, James Vincent McMorrow, Courtney Barnett, The Japanese House and more.


'Late Night Ball Game' captures what it's like to be stuck in your own head when you're deeply worried about revealing a secret to someone you love. It follows the story of a person coming out to friends, family, loved ones. A story that often reflects turmoil, hurt and pain.