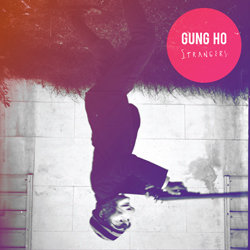 The Brisbane two-piece have spent the majority of the last twelve months doing two things - touring constantly and recording relentlessly. Now, before the year finally draws to a close, Gung Ho have announced the release of brand new single ‘Strangers’ - the third cut from their debut EP titled Anywhere Else (due at the beginning of 2013).

Gung Ho first demanded the attention of local and international listeners via their first two standout singles ‘Twin Rays’ and ‘Side By Side’. Blogs in the UK, USA, Greece, Europe and South America resounded with support for their seamless blend of surf-pop and post-punk influences, with Australian youth broadcaster triple j showing strongest support back home by providing full rotation airplay for both singles and a slot on 2012's Harvest Festival.


‘Strangers’ is yet another undeniable surf-rock gem from Gung Ho, showcasing catchy-as-hell guitar work, an explosively tight rhythm section and the endearing washed-out vocals of co-frontman Mike McAlary. Working out of bedrooms, home-studios and storage facilities around the country, the band crafted ‘Strangers’, with a unique DIY-aesthetic at the forefront.