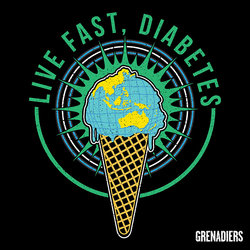 The ‘Live Fast, Diabetes’ tour will see Grenadiers hitting up venues in Brisbane, Sydney, Melbourne and Adelaide, plus appearances at the Long Weekender in Launceston, and The Hills Are Alive in Victoria. Coming along for the ride are rising Adelaide stars Horror My Friend.

To say 2015 was a formative year for Grenadiers would be a massive understatement. After the release of their second full-length album ‘Summer’ things took off for the Adelaide trio. The band scored a Triple J Feature Album, toured nationally with both British India and Unwritten Law, and smashed their own high-energy headline shows nationwide. In their hometown they picked up the gong for ‘Best Group’ at the South Australian Music Awards, supported national treasures Cold Chisel, tore apart the Triple J studios on Like A Version, and were nominated for the Australian Music Prize.


The track was self-recorded by the band and mixed by drummer James Balderston. It is the first single from the forthcoming album due for release in spring 2016. As expected, ‘Live Fast, Diabetes’ is bursting with the band's trademark pure punk rock energy, whilst being infused with an irresistible hook.