Greg Wells & The Blackwater Band - In A Moment - Internet Download 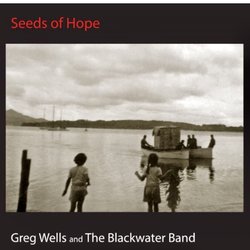 Greg Wells is a singer song writer from Hobart and has joined together with The Blackwater band to present his songs. The coupling of songwriter and some talented versatile musicians has helped bring the songs to life. This is Greg's second album, the first being "Keep it Real" released in 2016. Members of the band include Al Campbell, bass & Piano. John Britcliffe, drums & percussion, Emily Wolfe violin, Mal Elliott Acoustic & Electric guitars & Mandolin, John Coleman, guitar & vocals Greg Wells Guitar & Lead vocals On his previous album Old Blue bike received an outstanding Achievement award in folk & lyrics categories in the Global Music awards and on this current album "Seeds of Hope" his song Mathinna received the same award. The band regularly gigs around the Hobart area.


The story of an attempted rescue of a surfer by other surfers. The sad reality of life being so fleeting yet hoping that both good comes of it and the hope of reuniting people

Other tracks by Greg Wells & The Blackwater Band: Shine  -  Mathinna
%