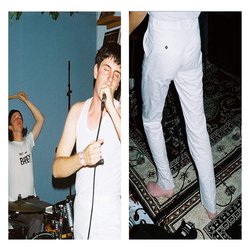 Between starting FLOWERTRUCK and settling into the music scene in Sydney, Rushforth began yearning for an outlet to pursue sounds that escaped him within traditional band formats. After purchasing a MPC 1000 and a couple of synths from gumtree, Rushforth created Greenwave Beth by combining the restrictive and industrial sounds of midi sequenced drum and bass with free form songwriting in the style of John Maus and Suicide. The product of this union is highly emotional music that ranges from manic electronic skirmishes to slow spiritual ballads that question the place and possibility of the romantic in a digital age.

Armed with frayed leads and broken pots Greenwave Beth began playing live in early 2016 performing with artists such as Hockey Dad, Mere Women and Big White.
Chaotic and organic, Greenwave Beth performances are explosive and impulsive, Rushforth stares you in the eyes while swinging the microphone like a mace in time with Blackburn’s kick drum as waves of sound break over your head. Greenwave Beth has been electrocuted on stage, fought through riotous audiences and blown up entire music systems, but none of this stops them as they fight through sets like greyhounds.


The pair release their debut single "Make Up", an energetic musing on redemption and recovery. Recorded and mixed by Richard Belkner at Free Energy Device Studios, Rushforth’s singing oscillates between strained and urgent against a powerful chorus of hope. "Make Up" questions the power of a frightened mind’s ability to change.