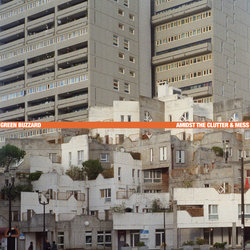 Green Buzzard unveils ‘Clutter & Mess’, the fourth and final single to drop from his forthcoming debut album Amidst The Clutter & Mess, out this Friday 8 November via I OH YOU.

Green Buzzard’s first single of the year, ‘I Don’t Want To Be Alone’ cemented his return, reaching #22 on the US Commercial Specialty radio charts, featuring as Track Of The Day on CLASH and being streamed over 100 thousand times on Spotify since its release in June. Follow up single ‘To Be Like You’ was added to FBi and Rage and was featured in Apple Music’s New Music Daily and Spotify’s New Music Fridays, Indie Arrivals and Broad Chords. ‘Nothing’s Happening Here’, the record’s contemplative lullaby, has been spun on FBi, SYN FM and Radio Adelaide.

Amidst the Clutter & Mess - out Friday 8 November, is a statement about learning to be comfortable with yourself, no longer keeping the world at arm’s length by telling fictional stories, or hiding behind fuzz and overproduction. And for a debut record, that makes perfect sense. It sounds like a coming of age.


‘Clutter & Mess’ is a track about marinating in your blues, as Paddy sings about depression and the physical and mental chaos that surrounds it: ‘the waves are crashing on my head / no I don’t wanna know ya / I never wanna leave my bed / Amidst the clutter and the mess’.