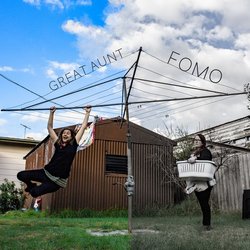 Great Aunt is a folk/Americana duo from Melbourne, Australia, rambling a musical line between the plaintive and the joyous. Their music is raw and austere, simple and bold; full of stomping feet and clapping hands, chants and harmonies, whispered words and soulful lament. Set somewhere between a gospel church in Louisiana and a dimly-lit speakeasy in Melbourne, listeners will hear tales of joy and grief, whiskey and wine, gratitude and purpose-seeking.

2019 will see the duo tour internationally to the US in September, in between two Australian tours, visiting even more regional towns than before as they release their first full-length album later in the year.


‘FOMO’ speaks of a modern anxiety – the fear of missing out on something better. Between the wailing steel-body resonator, imposing double bass, and their trademark cacophony of stomps and claps, you’d be forgiven for thinking this was a good-ol’ whiskey-swillin’ hoedown of sorts. If ‘FOMO’ were a journey, it’d be a dark spiral into a selfie-taking, status comparing wasteland.