Grand Salvo - In the Water 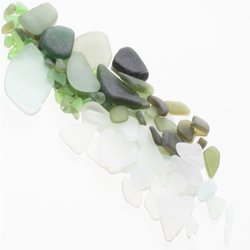 Sea Glass is Grand Salvo’s seventh album, and his Mistletone debut. This richly allegorical album explores how a single, vivid memory can shape who we are; resurfacing and altering our thoughts and recollections as the years go by. The album’s very structure is an approximation of how such a memory is forged; each song radiates out from a seed memory which unfolds like a lotus jewel in Field of Flowers, the second-last song and the only “straight” narrative song of this remarkable album. The album then closes with Standing On The Sea, a dreamlike journey on the beach that uncovers “a shard of sand smoothed emerald glass / and a change in the light”, layering the dreams of childhood and the memories of adulthood into a woozy contemplation of eternity and the cyclic, ever evolving nature of memory.


A baroque-folk rumination on memory, loss, the passing of time and death. The refrain, “Oh say you love me before I go / will you remember me when I’m gone”, is sung by a female chorus (Laura Jean, Lisa Salvo, Hannah Cameron, Michelle Surowiec).

Other tracks by Grand Salvo: In the Shade  -  Field of Flowers