Graeme Connors - A Heartache Or Two 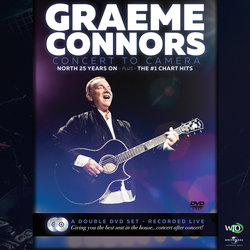 On the musical landscape, he represents an artistic integrity with an ear to our collective pulse. So much so, that his album NORTH was voted by his peers at number #3 in the Top 20 Best Australian Country Albums Of All Time.

After last years successful release of 'North - 25 Years On', Graeme returns with 'Concert To Camera North 25 Years On PLUS The #1 Chart Hits' featuring performances from his highly acclaimed 2014/15 concert tour. Concert To Camera gives you just over two hours in the best seat in the house concert after concert! Interspersed with to-camera introductions, insights and explanations of some of his best loved songs, this double DVD set documents the quality, longevity and relevance of one of Australia's great singer songwriters Graeme Connors.


North is jam-packed with serious subject matter. I didn’t set out to have it that way, it just happened. A Heartache Or Two' was the most light-hearted song on the album. When I introduce it I often say ‘here’s a song about absolutely nothing’. - Graeme Connors