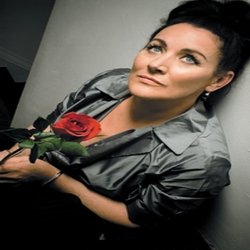 Grace started her singing career in 1976 performing in folk clubs in the UK.

Grace sang her passage to Australia on the Women’s Weekly World Cruise and once in Perth Grace hooked up with a few bands and eventually found her niche when she and Bernie Lynch formed Eurogliders. Eurogliders enjoyed major success in Australia with numerous hit singles and albums as well as chart success in the US. One of the highlights of touring the US was performing live to an audience of 65 million viewers on MTV’s New Years Eve show.

Grace has recorded several other albums of torch/jazz/blues songs. “Stormy Weather”, then “Gracious”, and “Live”, which was performed and recorded at the Sydney jazz venue “The Basement” with invited friends. – Don Burrows, James Morrison, James Blundell and a blast from the past, Grace’s partner in crime from the Eurogliders, Bernie Lynch.

On the way Grace has performed to countless numbers of people that have included Prime Ministers and Presidents, Royalty and the rich and famous. In 2006 Eurogliders recorded a CD of new material and Grace and Bernie featured in the highly successful Countdown tour.


Grace Knight once again delivers a sublime album of cool jazz, as well as surprising us with a divine interpretation a Hank Williams classic track ‘Your Cheatin’ Heart’.